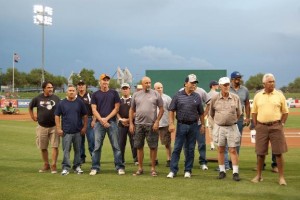 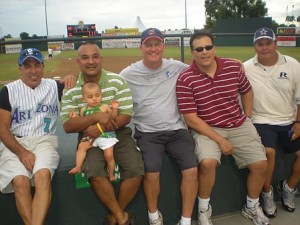 Jim Kuchar
Board member and Director of PR for the league, Jim currently plays with the National Indians and has been a league member for many years.

Lou Russo
Lou is a long time league member and currently playing on the Mountain Dodgers.

Jorge Valencia
Former member of the Pirates, Jorge has been a member of Tucson MSBL for many years and one of the league’s top players.

Pepe Valencia
Pepe has been a member of Tucson MSBL for many years, always one of the league’s top players. Currently playing with the Mountain Dodgers and National A’s. 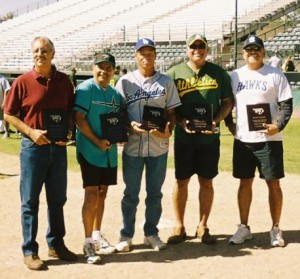 Ozzie Espinoza
Original league member who played on the ’89 Cardinals, and a member of several morning division teams.

Dennis Garcia
One of the original team managers in the afternoon division created in 2000.

Andy Hunt
Long time league member and one of the top players in the morning division. 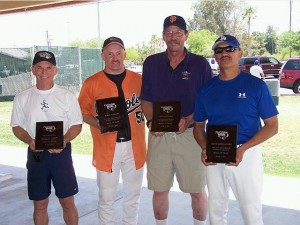 Robin Badart
Robin has been a big contributor to the league, most notably working with the city and county to secure the great fields we play on. In addition to serving on the league’s Board of Directors, he is also the league webmaster for tucsonmsbl.com, and has been player/manager of the Central Orioles for 4 years.

Jim Baugher
Jim’s contributions have helped the league grow in size and reputation during his term. Tucson MSBL is recognized by many in Tucson as the premier adult baseball organization, and it is due in no small part to Jim’s steady leadership. Jim is also player/manager of the Senior Giants, a team that has been together for many seasons in Tucson MSBL.

Rene Hernandez
Rene is one of the charter members of the league, and has played with or against almost all of the players in the TMSBL HOF. A tough competitor, a good friend, and a great addition to the HOF roster!

Bud Warnke
Bud is a charter member of the league, and remembers working with HOF Chair Herb McReynolds to get the league off the ground back in 1988. Bud has been playing and loving baseball since he was 7, and is another great example of what it means to be a member of Tucson MSBL. 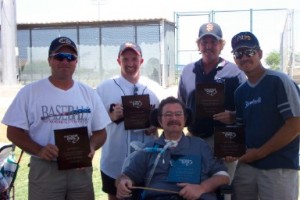 Steve Badart
Steve has played in Tucson MSBL since 1988. He has been active as both a player and board member, and through his efforts the league added the afternoon Central Division in 2000.

Bill Graham
Bill has been officiating baseball games for many years, and has been with Tucson MSBL from the beginning. Bill is no longer able to be with us on the field due to his affliction with ALS (Lou Gehrig’s disease), but he still loves the game of baseball and becomes the first umpire honored with membership in the league’s hall of fame.

Don Holp
Don Holp is another of the league’s original members, and has played for several different teams in both the morning and afternoon divisions. A tough competitor and good friend to many in the league.

Charlie Riesgo
Charlie’s leadership as President of Tucson MSBL for several years contributed to the success and growth of our league.

Jim Stone
Jim Stone has been a steady presence on the field and behind the plate at MSBL games from the start. He does a great job as the head umpire, and has worked side by side with the league to schedule umpires for games and address on field issues.

Dave Carranza
Dave C. has played in Tucson MSBL since the beginning, playing with several different teams. Currently playing for the Senior Yankees, Dave is still a threat at the plate and a valued friend and teammate to many in Tucson MSBL.

Dave Luera
In addition to playing for the a.m. Yankees, Dave has served as Tucson MSBL League Treasurer for many years. Dave’s background in finance and his attention to detail has helped keep the league in good financial health.

Charles “Doc” Witte
“Doc” played in Tucson MSBL for many years, and passed away early in 2003. He was happiest on the baseball field, where he is remembered by teammates and opponents as a tough competitor and sportsman. 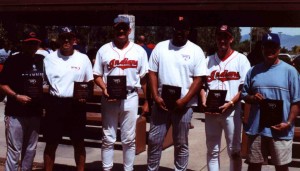 Jim “Cowboy” Grace
Pretty much everybody in the league who has been around at the same time as Cowboy has been struck out by him at least once (and some of us a bunch of times!). A great all-around athlete, Cowboy is a great hitter as well usually occupying one of the power slots in the batting order.

Joe Jimenez
Joe is another one of the founding members of our local MSBL affiliate. He has at least one championship under his belt as a manager and player. Joe served on the board in the mid to late 90’s and was in charge of getting teams organized to attend the world series in Phoenix. Joe is an unselfesh person who always does his best to help people in the league.

Herb McReynolds
Considered by most to be the founder of Tucson MSBL, Herb is a great guy and a tough competitor on the field. There are a lot of guys who get to play baseball through Herb’s efforts to get the ball rolling.

Marc Sewell
It was joked that the award ought to go to Marc’s wife for allowing him to play as much ball as he does! Marc has been in MSBL for many years. He also plays in both the morning and afternoon divisions, City League, fast and slow pitch softball, and pretty much all at the same time! He also takes two (more?) teams to the MSBL World Series in Phoenix every year. He has always been a tough competitor and a great sportsman.

Mark Stevens
Few people know or appreciate how much work this guy has done and continues to do for Tucson MSBL. Currently serving on the TMSBL Board as league VP and Secretary, Mark was also the original TMSBL Webmaster. And – yes, he even finds time to play with the Senior Indians!

Gary Williams
Amazing and inspiring are the two words that come to mind when this man’s name is mentioned. Gary’s struggle to overcome serious illness and return to the game he loves is well-known throughout MSBL and the Tucson baseball community. Not only did he return, but he is still one of the top players in the league and one of the most feared hitters. Each year the champion of the Senior Division is awarded the Gary Williams Cup, so named in honor of Gary and his victory over adversity that would have overcome a lesser man.

This message is only visible to admins.

Error: Error validating access token: The session has been invalidated because the user changed their password or Facebook has changed the session for security reasons.
Type: OAuthException
Subcode: 460
Solution: See here for how to solve this error